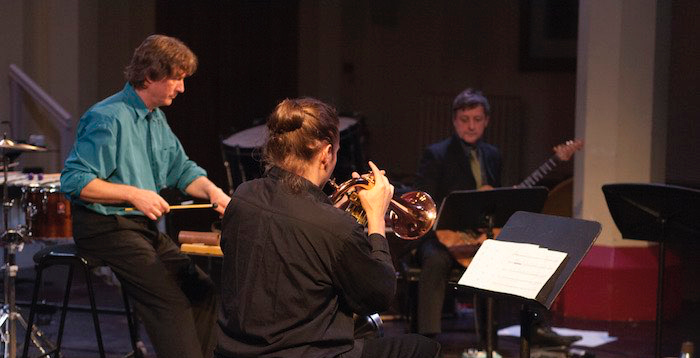 Around 2010 I found myself (more by chance than personal decision) doing research studies at the University of London. In that city I could satisfy my thirst for classical music at events like the BBC Proms, where I could listen world-class orchestras and soloists. Other musical interests of mine, like a long-standing love for hindustani classical music, found rejoice in the magnificent Darbar festival, as well as free improvisation at Cafe Oto.

But when it came to ‘Contemporary Music’ –the very kind of music that occupied my own creative efforts– I found few events that matched my interests. With notable exceptions, I could identify on one hand a strong institutionalised conservatism, and on the other a more conceptual kind of experimentalism, none of which really appealed to me.

In this scenario, the concert seasons that Elision ensemble held in a venue near King’s Cross in London were to me like discovering a fascinating oasis. In those concerts I could really find refreshing new music that was hugely stimulating and that I felt relevant to my own compositional practice. There I became acquainted with the work of current composers that were relatively new to me, like Liza Lim, Evan Johnson, Dominik Karski, Tim McCormack, Klaus K. Hübler, Aaron Cassidy and Bryn Harrison, as well as familiar names like Ferneyhough, Dillon, Clementi, Barrett, etc. all performed with fiery energy and thorough expertise (many of these are available in two CDs recorded at the time: Transference and Strange Forces).

The exposure to this new music quickly allowed me to develop a deep admiration for some of these composers’ work, and thus I became especially fond of the creative sensibility and intelligent refinement that pervades the music of Liza Lim, whose lessons in Darmstadt I had a chance to attend in mid-2010. Back in Britain, I was lucky to find a way to change my doctoral scholarship to continue my research in Huddersfield under her supervision, benefitting from her attentive eye and committed guidance, and also getting in much closer contact with that kind of stimulating musical environment that Elision represented.

The possibility of hearing Elision regularly, first in London and later in Huddersfield, massively enriched my musical development at the time. I don’t think my own music –perhaps more withdrawn and rarely ‘virtuosic’– ever really followed the lines of what could be perceived as Elision’s most representative repertoire (a piece I once wrote for them was described in a review as “the least Elision-y” of the concert). However, exposure to that kind of repertoire in the ensemble’s distinctively confident and uncompromising approach was an experience that broadened my musical horizons and informed my current practice.

All this to say: Happy 30th anniversary, Elision!