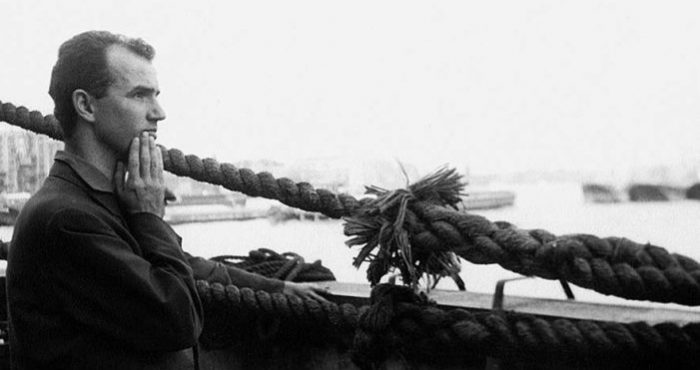 Following on the Nono-themed posts, here is this beautiful text by Leni Alexander, which I’ve only recently come across. It was originally published in Spanish in the Revista Musical Chilena, in response to the news about Luigi Nono’s death in 1990. I’ve attempted this English translation with the sole aim to share it with others who may love these two composers’ work as much as I do.

I met Luigi Nono in April of 1954 in Paris. Someone introduced us during a concert of the Domaine Musicale, where Hermann Scherchen, who had been his composition teacher, was going to conduct a work by Nono. From that encounter a friendship arose, which lasted thirty-six years, until his death. My studies at the Paris Conservatory with Olivier Messiaen had just finished, and I was going to travel to Italy in the following days. Nono invited me to his house in Venice – back then he still lived with his father, a prestigious engineer. Luigi was waiting for me at Mestre station, the final stop of the train to Venice. From afar I could see his tall, skinny figure, his dark, curly hair, his fine features that reminded of the Venetian paintings of the 17th Century. Soon a vaporetto took us to his home, located in the Accademia quarter, in front of the church della Salute. It was a big, spacious house. He lead me to the room where he worked, repeting once and again “don’t step there, don’t step, careful.” In semi-darkness, the blinders shut due to the midday sun, I saw the floor covered in sheet music; the thick, very dark ink that he used was just drying. It was the score of his work ‘La Victoire de Guernica’, which should have been finished three weeks before for its premiere by Scherchen, to whom the work was dedicated. Nono explained his work to me quickly because we had to go to Bruno Maderna’s rehearsal at the Teatro La Fenice, where he was going to conduct that same night a concert with works by Webern. Nono had a deep admiration for Maderna, who had also been his teacher.

Although I saw Nono many times in the following years, now thinking of him, after receiving the news of his death, those were –as much as the weeks that we spent together thereafter– the moments that have stayed engraved in my memory. That is why now I wish to talk about personal memories, memories of friendship, which in these moments I feel closer, beside our relation as ‘colleagues’.

Later we saw each other again at the Darmstadt summer courses, where Luigi, who spoke perfect German, gave lectures on ‘Committed Music’, since he was a prominent member of the Italian Communist Party, and because he thought that in the current times only a music with ideological content made true sense. In many occasions we had strong arguments, which made us temporarily take distance. There were terrible fights in an encounter at the Zagreb music festival in Yugoslavia, in which works by both Nono and myself were played. Later on, again in Venice there were new very friendly encounters. Nono had married Nuria, Schönberg’s daughter, and had two daughters, Silvia and Bastiana, whom he deeply loved. He lived in a ver spacious house in la Giudecca, the working class area of Venice, where he worked and met with friends for long meals and pleasant conversations. Perhaps it was in those years that I got to know Luigi more deeply, through his family life and our lengthy conversations about music. In 1967 he came to Chile with his whole family for a few weeks, and for most of the time his daughters stayed with my son and the maid in our home.

In the late days of his life, I shared with Nono between Venice, his city of birth, and Freiburg in Germany, where he had founded an electroacoustic music institute, and taught composition. Two or three years before his death we run into each other by chance at the Grand Palais, during an exhibition of Latin American paintings. At first, when he stood in front of me I almost couldn’t recognise him. He looked like a very young man, being already past the age of sixty. He had a very dark hair, just like when I saw him for the first time many years before. He looked happy and awed by the impressive exhibition. The last time we met, his hair was completely white. “Yes, I am changing, going back to the beginning of my existence,” he seemed to say with a happy and proud smile, due to his change.

Luigi was always faithful to himself, just like Shakespeare makes Laertes say in Hamlet. Faithful to his political ideas and to his artistic ideals: two paths in life that were not separate for him, and which were his raison d’être. The last time I saw him was last year, he was walking alone, engrossed, on a street in Berlin. I saw him from across the road; he was looking down. I didn’t call him.