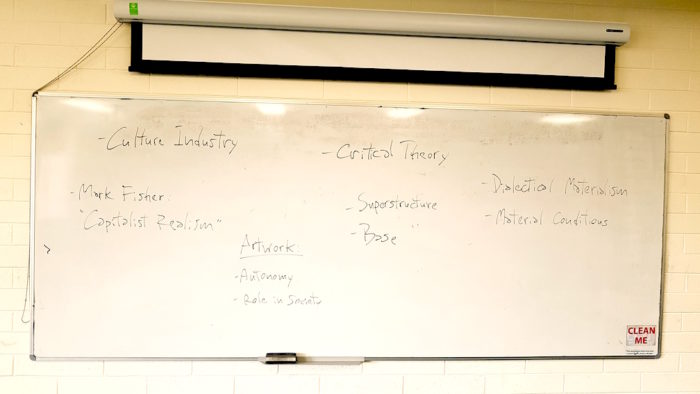 Today I delivered the last of this year’s ‘Aesthetics and Compositional Practice’ classes that I teach at ECU. In the four years I’ve been teaching this, I’ve found a chance to share a lot of the knowledge and perspectives that I’ve brought with me to Australia. It also has given me a chance to update and broaden my points of reference; learning about and engaging in discussions that are particularly relevant here and now.

If we started the semester with a rather canonical overview, reading and commenting on sections from Nietzsche’s The Birth of Tragedy, and a good dose of Adorno, little by little we progressed –via Critical Composition, and Lachenmann in particular– onto readings that are more relevant to current ways of thinking music.

This reflects a personal quest to push my own thinking and practice beyond the very patriarchal and eurocentric canon in which I was educated, and so every year I include new texts that give us –students and myself– a chance to challenge that model and enrich the discussion.

One of the new authors I introduced this semester was Robin James, from whose book ‘The Conjectural Body: Gender, Race and the Philosophy of Music’ we examined a chapter.

The final text we discussed in this last session today is a very recent article by Sonya Holowell: ‘Decolonising the High Arts (Part B)’, published just a few months ago, which deals with opera, but more importantly, with issues of decolonisation and the politics of reconciliation here in Australia.

As a casualised worker in Higher Education I have little agency regarding contents and focus of the general curriculum. At least I can hope that in these eleven one-hour sessions that I’m hired to deliver every other semester, I’m contributing something valuable, beyond a mere ‘provision of educational services’.