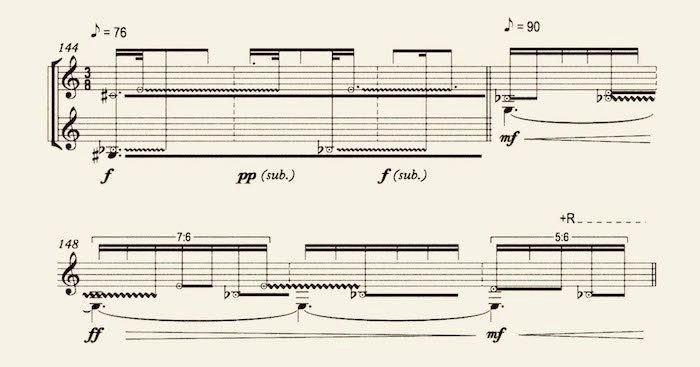 In 2013 I wrote a piece titled Instead for contemporary clarinet champion Heather Roche; one of the most enriching collaborative experiences I’ve had as a composer. After its premiere in Berlin and several other performances, Heather included it in her recent album ‘Ptelea’, a collection of solo pieces written for her by a diverse group of composers, including Aaron Einbond, Chikako Morishita, Martin Iddon, Martin Rane Bauck and Max Murray (available from NMC records and on iTunes). Further to encouraging you to buy said album, here I would like to share some insight on the construction of this little piece.

Instead follows a compositional approach that I call ‘situational’. In my 2013 doctoral thesis I used the term ‘situation’ to describe a segment of musical construction that has no narrative significance of itself. It doesn’t offer any sense of beginning, or end; it doesn’t appear as a consequence of other such constructions, nor does it lead to subsequent ones. Their beginning and ending points, as well as their position within a musical form are arbitrary. This concept is somehow close to Stockhausen’s moments, yet more radically a-functional. Several such situations are used in this piece in a fragmented, recursive way.

Four original textures of undefined duration were written separately, from which fragments of different lengths were cut to be alternated as situational segments in the final formal organisation. All these original textures, or ‘proto-situations’, explore similar unorthodox instrumental techniques as source of material. The clarinet is taken here as a ‘found object’, to some extent deliberately disregarding its tradition of characteristic technical sophistication and flexibility. Using the lowest five chromatic notes of the instrument as basic fingerings, simple alterations to them by means of opening higher holes on the instrument’s tube produce ‘cross-fingerings’, which usually result in rich inharmonic sounds.

I first used this form of notation in my piece from 2011 Untitled on Canvas for two baritone saxophones, in which it proved to be an efficient way of notating these instrumental actions that was intuitively clear for the performers. In that piece, though, these resources were integrated in a general context dominated by ‘normal’ notes, in a dialectics between traditional and altered fingerings.

A limited number of such fingerings were combined in different ways, with varying dynamic and rhythmic definitions, giving birth to four ‘proto-situations’. Then five fragments were extracted from each, of durations 7, 14, or 21 seconds. Only one of these fragment – placed in the beginning – has an exceptionally long duration of 91 seconds. The purpose of such a dissimilar duration is to destabilise an otherwise too neatly proportionate form – a resource somewhat comparable to situations of similarly unbalanced extension in Ver, or in Últimos, yet done here within the different context of reoccurring situations.

The fragments were then juxtaposed in different combinations, repeating utterances of the same texture with two or three different ones interspersed before the next reoccurs. The resulting basic formal scheme is shown in the following figure:

Further to the formal scheme above, a distorting element was superimposed in the form of sudden interruptions to an otherwise continuous sound stream: a momentary ‘switching off’ of sound introduced at different time intervals. During these gaps, each with a flexible duration within the range of five to eight seconds, the performer is asked to remain immobile.

The result is then subjected to the superposition of a unifying layer, transversal to all situations: a periodic alteration of whatever is being fingered, by means of (a) opening the ‘register’ key, or (b) modifying the embouchure in order to force the production of multiphonic sounds. Multiphonics appear elsewhere as a result of the cross-fingerings and dynamics anyway, but only under such modified ‘multiphonic-enforcing’ embouchure are they actively favoured.

From a more global perspective, the whole combination of reoccurring textural fragments juxtaposed in different combinations, interrupted by pauses and with periodic alterations superimposed onto the total resembles a texture in itself: a complex yet stable combination of a limited number of elements that could be prolonged for any duration without affecting its identity. Since this takes place in the formal dimension, and being itself composed of textural parts, I call it a ‘meta-texture’.

The recursive situational approach to composition shown in Instead opened new questions, such as to what extent the reoccurrence of situations is meant as interruptions to a virtual ongoing continuum, or rather as individual segments belonging to the same class. From an artistic point of view, I find it more interesting to dwell on these questions rather than attempt to clear them by seeking more univocal formal solutions. Such questions, by conveying a sense of ambiguity, reveal an underlying tension that can be creatively fertile.